U.S. is fooling itself by attempting to cover…

Thousands of miles away, numerous people in China cherished the memory of the great man who devoted his life to Zambia’s independence and development, and who had made remarkable efforts in promoting the friendship between China and Zambia, as well as China and Africa.

Kaunda was an old and good friend of the Chinese people, having long been committed to the cause of China-Zambia friendship, Zhao noted.

On Chinese social media, many netizens, with love and respect to Kaunda, on Friday shared and forwarded a video of Chairman Mao Zedong meeting Kaunda in Beijing in 1974.

Born in April 1924, Kaunda was an internationally renowned leader of African independence movements, politician and social activist, who had made historic contributions to the independence of Zambia and the liberation movements of southern Africa.

He had also been activity pushing forward the friendship and cooperation between Zambia and China throughout his life. He announced that Zambia would establish diplomatic relations with China on October 24, 1964, the day after Zambia declared its independence. With the efforts of both sides, China and Zambia soon officially built diplomatic ties and sent ambassadors to each other on October 29 that year. Kaunda had slammed the allegations of Westerners that China was “grabbing resources in Africa.” Amid the 45th anniversary of the establishment of China-Zambia diplomatic relations in 2009, he told Chinese media that [some Western forces] who were accusing China of coming here to grab wealth, had actually been coming to the continent for hundreds of years to grab economic benefits.

China, instead, has helped many countries in Arica, including Zambia, to struggle for independence, and is continuing to work with the countries to help them develop their economies, Kaunda said.

He cited the Tanzania-Zambia Railway Authority (TAZARA), saying the project developed by China in the 1970s was part of the contributions of China to the development of Africa, and a model of the friendship between Africa and China.

“That’s what China is doing – helping us, as friends, genuine friends,” Kaunda said in an interview with Xinhua News Agency in October 2009.

In November 2009, Kaunda was honored with the China-Africa Friendship Award in Beijing, and was chosen as one of the “Five African People Who Deeply Moved the Chinese People.”

The creative term “all-weather friend,” which vividly describes a friendship that remains strong under all kinds of conditions, was firstly put forward by Kaunda.

Decades later, “all-weather friend,” often mentioned by leaders of China and some African countries on various occasions, has become a special witness that highlights the long-standing China-Africa relations, observers said.

Friendship with generations of Chinese leaders

Kaunda had visited China several times from the 1960s to the 2010s. He met and talked with Chinese leaders in Beijing or Lusaka, keeping consolidating and promoting China-Zambia ties during the decades.

Kaunda became the first witness of Chairman Mao’s “Three Worlds” theory in his second visit to China in 1974.

“In my view, the United States and the Soviet Union belong to the first world. The in-between Japan, Europe and Canada belong to the second world. The third world is very populous. Except for Japan, Asia belongs to the third world. So does the whole of Africa and Latin America,” Mao, then 81, told Kaunda.

Kaunda responded that he agreed with Mao’s analysis, saying it was precise and accurate. Through the years, China, as a member of the Third World, has been firmly supporting Third World countries, including Zambia, in their struggles against hegemony and interference by the Western superpowers and pursing self-development. 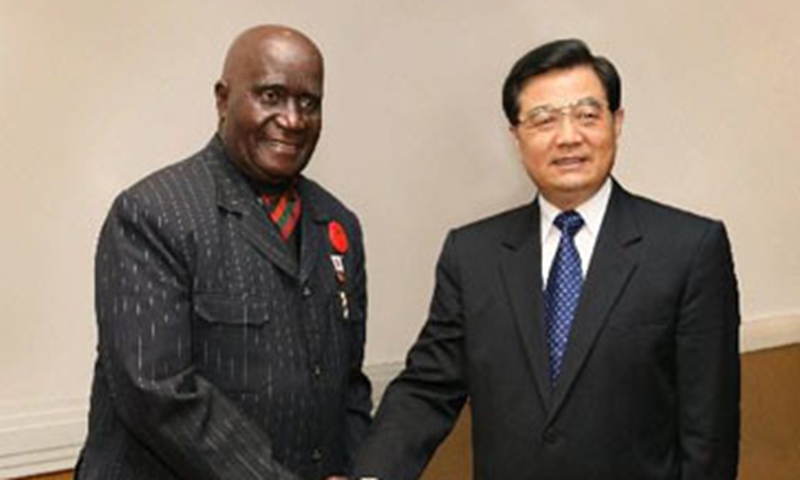 File photo:Xinhua
People’s Daily reported that President Hu Jintao had a thorough, warm and sincere communication with Kaunda in 2007 in Lusaka, with the two looking back on history and the friendship between the two countries.

President Hu warmly greeted the 83-year-old Kaunda on February 4, 2007 in Lusaka. He told Kaunda: “You are an old friend of the Chinese people. You and the older generations of Chinese leaders including Chairman Mao Zedong, Premier Zhou Enlai and Comrade Deng Xiaoping have forged a profound friendship. I am very happy to see you today.”

Kaunda replied that it was great to be able to greet leaders from China – Zambia’s all-weather friend – in Lusaka. The Chinese people have always been Zambia’s genuine friends, he said.

“There is an old Chinese saying: Don’t forget the well-digger while drinking water. The Chinese government and people will never forget your outstanding contribution to the development of China-Zambia and China-Africa friendship,” President Hu responded emotionally.

Hu praised that “during your tenure as President of Zambia, the Tanzania-Zambia Railway, built by China, Zambia and Tanzania, has become a monument in the history of China-Zambia, China-Tanzania, and China-Africa relations,” according to People’s Daily. 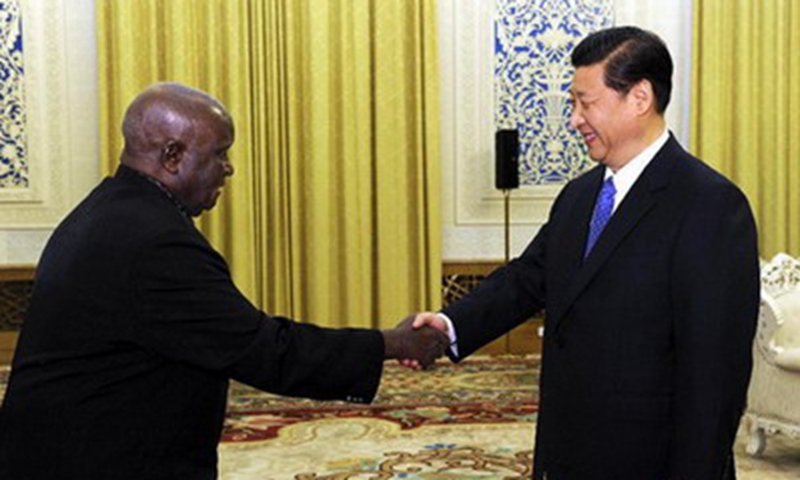 File photo:Xinhua
When Kaunda visited China in 2011, relations between China and Zambia experienced nadir following the new party taking office in the African country. On November 24, Kaunda met with then Chinese Vice President Xi Jinping in Beijing and Xi gave him a deep impression.

Kaunda said he was worried about the situation then. But Xi said to him that the all-weather friendship between the two countries, established by the old generation of leaders of China and Zambia, plays a vital role and has profound influence in China-Africa ties, Kaunda said.

Xi told Kaunda that China has always cherished the traditional friendship and has attached great importance to China-Zambia relations. Kaunda said that Xi is a sincere and down-to-the-earth person, expressing his desire of keeping the friendship between the two countries. Kaunda said he clearly remembered what Xi had said that he was willing to work with the new Zambian government to deepen friendship and promote pragmatic cooperation.

Photo:VCG
Remembered by diplomats and netizens

From diplomats to ordinary netizens, Chinese people shared precious memories with Kaunda on Friday and expressed their respect to this old and good friend.

Former Chinese Ambassador to Zambia Yang Youming  remembered clearly the first time he met the late leader when Yang arrived in Lusaka to assume his post in 2014. Kaunda had bright and sharp eyes that nobody could tell he was in his 90s.

They took a group photo with smiles, as Kaunda required. When Yang and his colleagues said goodbye to Kaunda, the old gentleman did not respond but trotted down the hallway and stopped at Yang’s car, looking back with a proud face. He wanted to see the Chinese diplomats off. 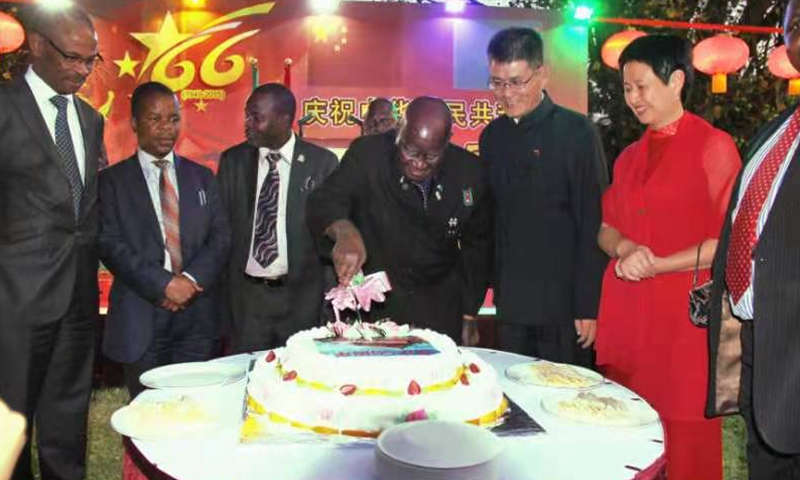 File photo
Another impressive moment Yang shared was October 2014 when the country celebrated its 50 years of independence. Surrounded by flame-like Poinciana blossoms in the streets, Kaunda waved a white handkerchief to the crowds and said “one Zambia,” the people shouted “one nation” back; he then spoke louder, the crowds responded louder.

“One Zambia, one nation” is the principle Kaunda made for the young multi-ethnicity country to be united.

Yang had once invited Kaunda to spend Spring Festival with them, and prepared vegan food for him. Kaunda used to eat meat, but when he was expelled from a butcher’s by white colonizers, Kaunda vowed to himself that he would never eat meat again.

Kaunda liked music and singing, and sang at the banquet “a song of unity,” which he wrote and later became a household melody, dubbed as a second national anthem. The song encouraged 73 ethnicities in Zambia to unite and develop in stability.

When Yang left his post, he went to say goodbye and Kaunda saw them off as he always did. “I waved back, feeling we can meet again. I never imagined that it was farewell,” Yang wrote.

On China’s Sina Weibo, a user described Kaunda as “a real hero who had the courage to fight colonial powers and safeguard national dignity.”

A star fell from the sky and a real fighter who had battled against the West rested, wrote another.

He was from the time of Chairman Mao and the founder of China-Zambia friendship! A Weibo user posted with emotion.

The friendship lasts until today despite some winds and rain. No need to mention the famous Tanzania-Zambia Railway built with Chinese assistance, Chinese companies today develop farms in Zambia, offering job opportunities and train locals to become technicians in the country’s agricultural upgrade.

During the COVID-19 pandemic, the Chinese government and companies have offered medical supplies and technical support for treatment and disease control.

Ganduje gives staff of office to new Emir of Rano

China’s Path To Carbon Neutrality By 2060

U.S. is fooling itself by attempting to cover up failure in response to COVID-19 through political manipulation