Merry Bell Academy, Abuja, has celebrated its 2021 cultural day with a call on the students  to promote issues that will continue to unite the country.

During the cultural day held at the school premises in Jikwoyi, Federal Capital Territory (FCT), the Director, Gloria Jeremiah, said the essence of the exercise was to maintain the good cultural identity of each geo-political zone of the country.

The cultural day tagged – “Back to our root” brought about performance, ranging from dance to various display of cultural dresses from the pupils as well as food from parents.

The cultural performance was rolled into the six geopolitical zones of Nigeria, of which a panel judges was on hand to rate the performance of the pupils.
At the end of the day, North East/West clinched  the top prize with South South coming second, followed by North Central, with South West and East coming in next.

The visibly elated director, who expressed delight over the performance, explained that,  “the essence of the cultural celebration is to go back to our roots, before we became American and British citizens, we were first of all Nigerians, we don’t want our culture to die, we want it remain, we want to uphold our culture.

She also appreciated the support of the parents in the success of the event.

Earlier, Mr Bello Ahmed Zagga, who represented Alhaji Ibrahim Liman of Fire Service asked the gathering to observe the activities of the students and come together as a country.

A parent, Mrs. Olalekan Omoyemi thanked God for the fantastic planning and hosting of the cultural celebration.

According to her, “My children knew about their Yoruba culture, I’m proudly a Yoruba woman, and they knew about other cultures today, I want the school to continue with the programme,” she said. 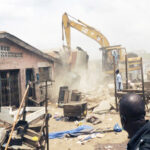 Basic education to get 3% from consolidated revenue fund – FG

Rivers to enforce compulsory use of face mask in schools